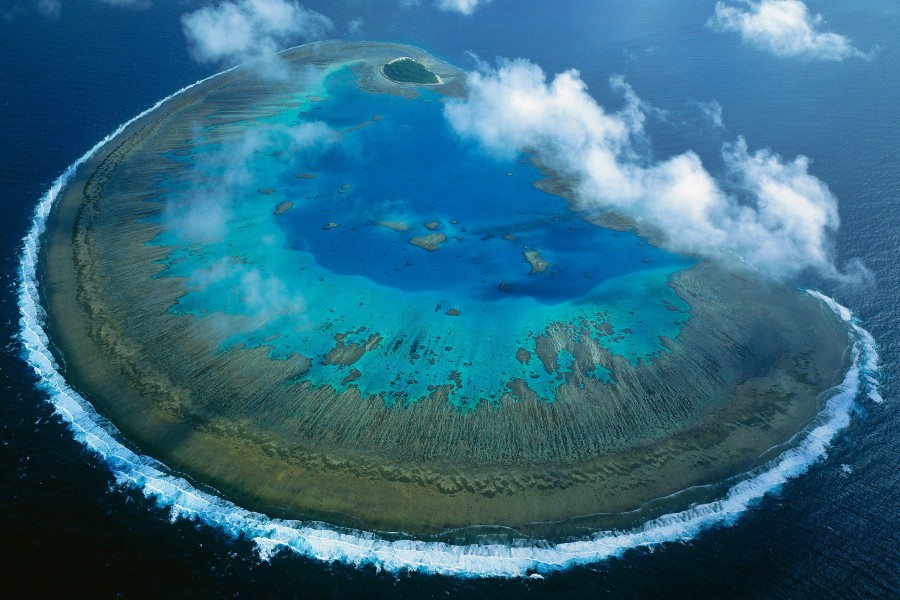 Enduring, c.6,000 BCE, with white settlement in the nineteenth century

Coral flourished for thousands of years off the north east coast of what is now called ‘Australia’. It grew up from the shallow sea-floor forming a vast structure — the biggest ever made by a living organism — made up of over 3,000 reefs stretching over 2,300 kilometres. This most exuberant expression of life, an incredible diversity of colourful beings, includes hundreds of types of hard and soft coral, ascidians, bryozoan and other oceanic invertebrates It includes thousands of species of fish of all shapes and sizes; mammals such as whales, dolphin and dugong; reptiles like turtles and crocodiles; and hundreds of species of birds. At the southern end of this structure lies a particularly reef which pushed a small 14-hectare part of itself up above the high-tide line. This patch of dry reef was used by fishing sea-birds to rest. The birds began leaving faecal matter, which in combination with ground coral, began to build up the island. The birds carried out seeds in the digestive systems which grew to become trees. An entire island composed of coral and bird poo emerged from the reef.

Lady Musgrave Island was named after the wife of a colonial administrator. Long before then, the Aboriginal people from the Gureng Gureng country called the island Wallaginji, meaning ‘beautiful reef’. Europeans first came into contact with the island in the nineteenth century, and soon set about devastating it. Shortly after charting the territory, they set to mining guano from the islands in the 1890s, and introducing goats which ruined the vegetation. The Australian military used it for bombing practice during the Second World War. In the 1970s, the devastation started to turn, with the goats being systematically eradicated as part of conservation drive. The Great Barrier Reef Marine Park, and World Heritage Site was established soon after. Since then, the vegetation has made a strong recovery. Presently, the coral cay is a popular destination for recreational sailors seeking shelter in its picturesque lagoon, and day-trippers coming over on a power catamaran. There are spaces for forty campers on the island, with a composting toilet, but no fresh water.

Lady Musgrave Island is included in this list of 100 Places of Emotion because of it is an exquisite but potentially tragic example of a tiny tropical island — at once surrounded by beautifully clean waters that teem with abundant marine life, and under ecological threat. Unlike continental islands, the island is largely composed of coral, making it an otherworldly place for terrestrial visitors. The island’s fragile future is reflected in a troubled past, with much environmental degradation since European colonisation. The possible future of the island is anticipated by the 2006 bleaching event when a vast track of around 800km of the Great Barrier Reef died due to high water-temperatures resulting from global warming. Some of the most vivacious and diverse ecosystems in the area were reduced to slime-coated bleached skeletons. While Lady Musgrave was not harmed in this event, its future is unsettled. On the mainland, 115 kilometres west of the island, lies Gladstone, one of the world’s largest coal exporting terminals, with around 50 million tonnes of the substance passing through the port. A sense of possible loss hangs over the island, giving it a kind of precarious beauty, with its splendour potentially to be reduced to ruins by the human toxification of the atmosphere.