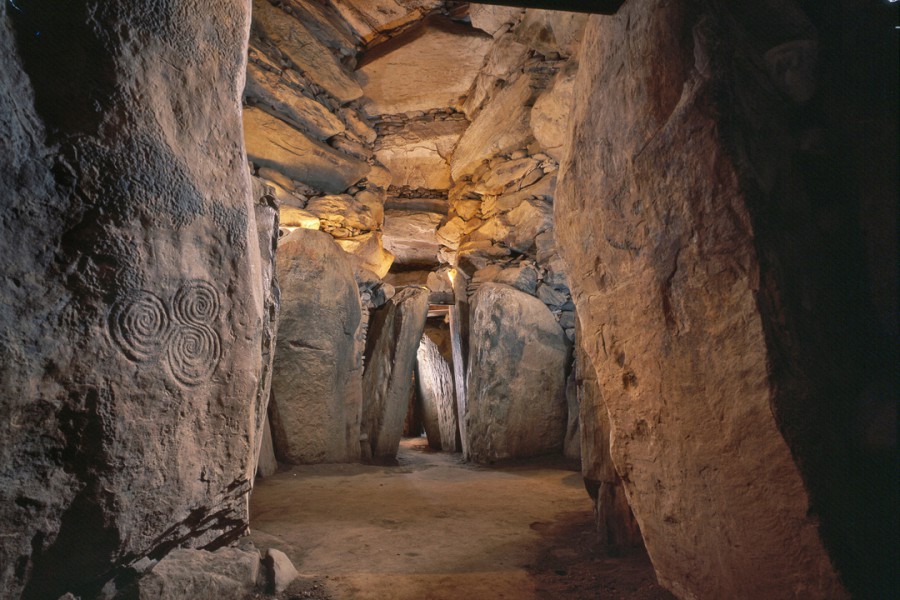 This image is of the artificially lit inner-chamber of one of the oldest and best-preserved passage tombs in Western Europe. This Neolithic and pre-Celtic structure is 5,200 years old, and as such predates the Pyramids of Egypt by 600 years and Stonehenge by 1,000 years. Each year on 21 December, which marks the winter’s solstice, the tomb is lit naturally by sunlight — weather permitting! The meaning of the triple spiral or triglyph carved into the rock at the very centre of the main tomb, remains a powerful symbol; its significance remains shrouded in mystery.

Newgrange derives its name from being part of the farmlands or grange, which surrounded a nearby Cistercian Monastery founded in 1142. Newgrange is situated in County Meath, very close to the River Boyne, which snakes quietly past. Mythologically the Boyne River is named after its creator and protector the Goddess Boann. She is reputed to reside in the area with her partner — the Dagda. This ancient passage-tomb is eight kilometres from the town of Drogheda, County Meath, which is forty kilometres north of the capital Dublin. Drogheda is a site of a massacre orchestrated by Oliver Cromwell in 1649. It is not far from the battleground where the Dutch King William of Orange defeated the forces of the English king, James II, in the Battle of the Boyne in 1690. This battle consolidated Protestant rule on the island. Newgrange is also very close to the Hill of Tara, the ancient seat of Irish kings. In 1993 Newgrange, along with nearby passage tombs of Knowth and Dowth, became part of a complex that was designated World Heritage by UNESCO, because of ‘their outstanding cultural legacy’.

When the Romans conquered most of Western Europe in late Antiquity, they brought with them the Greek notion of logos, which was used to displace and suppress indigenous forms of mythos. Ireland is one of those parts of Europe, because the Romans stopped at Britain, where the subsumption of mythos by logos was largely unsuccessful. In the centuries that followed, the English colonial rule of Ireland, which has been ongoing now for more than 800 years, has included numerous attempts at the destruction of language and culture, dispossession of people from their lands and most importantly, any form of rebellion or resistance. When we engage with Irish storytellers such as James Joyce, Samuel Beckett and Seamus Heaney, we find common themes and images such as an engagement with dark humour, rivers, spirals, the re-emergence of the feminine, the trinity, reimagining how to respond to cultural and linguistic devastation — all, at a number of levels, echo the chamber of Newgrange.

Newgrange is included in this list of 100 ‘Places of Emotion’ because it is one of the sites on the planet that shows the earliest formative activities of human engagements with the passing of time, with the relationship between life and death, and with the cosmos. Overlaid by a history of political struggle over sovereignty, Newgrange is a place where symbols of customary knowledge (now largely untranslatable) force us to reflect upon the interplay between the nature of communication, the landscape and social meaning.