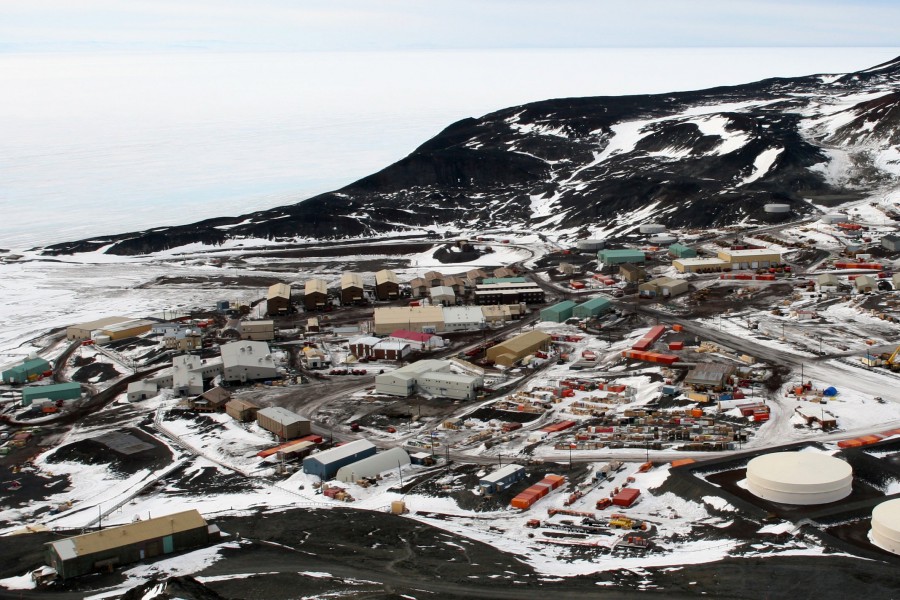 McMurdo represents one-fifth of Antarctica’s total population, with much infrastructure, some of which can be seen in our chosen image taken in 2006 from Observation Hill. The photograph shows lots of black rock, white snow, and grey frozen mud. It is peppered with sheds, shipping containers, a port, various communications domes, storage for 42 million litres of fuel, and a decommissioned nuclear power-plant.

McMurdo is located three thousand kilometres directly south of the bottom of New Zealand, near where the Ross Sea meets the Ross Ice Shelf. It is built upon a small rocky outcrop called Ross Island. All of these creative names were given by British explorer James Clark Ross in 1841 during the first charting of the territory. Antarctica remained unseen by human eyes until sighted by a Russian expedition in 1820, and it took another 75 years before a team of Norwegians actually set foot on the frozen continent. This late material entry into global history was not due to a lack of physical size, for at around 14,000,000 km2 Antarctica is larger than any country in the world, with the sole exception of Russia.

McMurdo station was founded in 1956 by the United States government, and became the biggest settlement in Antarctica, with the capacity to house 1,258 residents in summer. At that time, they enjoy a daily mean temperature of –2.8°C (January) under a never-setting sun. The population plunges to in winter during months of darkness where the mean daily temperature in August is a cruel –24.6°C, and only a few people stay.

The continent is frozen under an average two kilometres of ice, and is surrounded by thousands of kilometres of stormy, dangerous oceans. Ross Island is very mountainous and has an active volcano standing a massive 3,794 metres above the frozen sea. A nearby smaller dormant volcano makes up for its sleeping state by sporting the name Mount Terror.

McMurdo Station is included in this list of 100 Places of Emotion because of its extreme location on the edge of the vast, frozen continent. The isolation and severity of the environment has provoked much philosophic musings and emotional description. Werner Herzog’s documentary, Encounters at the End of the World, vividly captures a number of the eclectic and eccentric people that that have been somehow drawn to live in such an extremely remote location. Populated largely by scientist and technicians, the Station routinely deals with blizzards, months of endless darkness, or a spinning un-setting sun. That humans can live in such a harsh environment shows how adaptable we can be, at least when supported by large amounts of power inputs from a high-tech oil-fuelled industrialism.