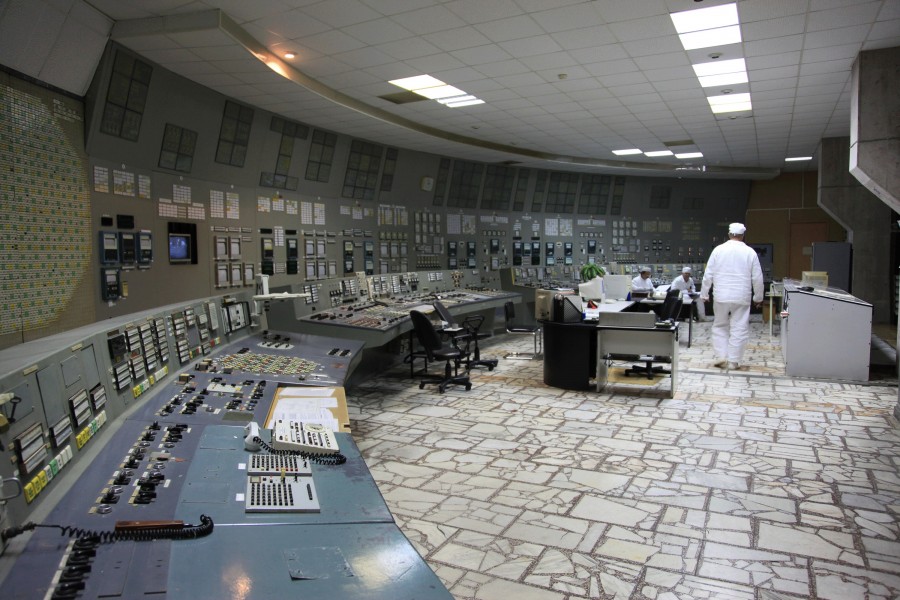 A great arching interface bends across one side of the control room, with hundreds of switches, dials, knobs, buttons, screens, and gauges. Blinking lights emerge from the aging metal desk and curved wall. Fluorescent lights illuminate the 3,000 white-clad staff who amble about softly in contamination-free white shoes. This is the main control room of the infamous Chernobyl Nuclear Power Plant. This, Ukrainian plant’s first reactor, was activated in 1977, with three more coming online over the next six years. Each had the capacity to generate 1,000 megawatts of electric power, adding up to around 10 per cent of the country’s requirements.

A generation before this photo was taken, back on the 26th of April, 1968, at 1:23 in the morning Moscow-time, operators shut down Reactor 4 as a part of a power-failure test. There was a malfunction, an explosion, and the reactor suffered a catastrophic failure. Uncontrolled reactions and a raging fire lofted plumes of irradiated material into the atmosphere of north Ukraine. The blast killed two workers, and then a further 29 firemen and employees died of acute radiation poisoning. Around 4,000 deaths have been linked to the meltdown, along with the forced resettlement of around 350,000 people who lived within the 2,600 km2 exclusion zone.

Around four hundred times more radioactive material was release from the power plant than the atomic bombing of Hiroshima. Although, to put it differently, it was also about only 1/1,000th of the total amount of radioactivity release during the era of nuclear weapons testing. Nevertheless, approximately 100,000km2 of land was affected by radioactive fallout, particularly Belarus, Ukraine and Russia, as well as all of Europe, apart from the Iberian Peninsula which was spared owing the chance of the day’s weather.

The political fallout echoed around the world, with the anti-nuclear movement and environmental movements using it as a prime example of the dangers of nuclear power. The costs of the disaster are multidimensional and difficult to estimate, with a complex array of accident management, decontamination efforts, lost power supply, lost land, job losses, dislocated populations, health problems and neuropsychological effects. Whatever way it is cut, financial costs would spiral into the hundreds of billions of dollars. The clean-up effort is scheduled for completion in 2065.

Chernobyl Nuclear Power Plant is included in this list of one-hundred places of emotions because it was the site of one of the world’s worst nuclear energy disasters. This event strengthened the push against nuclear power and spread awareness about the border-crossing nature of ecological catastrophe and contemporary politics, being seen as a symbol of globalization and risk. To this day, nuclear power is a controversial issue, with some championing the techno-scientific solution, often stressing its benefits over carbon emitting fossil fuels, with others deeply concerned about the toxic waste, concentrated power and possibility of catastrophic meltdowns.